Ah, the joy of back-to-school in-service days. The long meetings with agendas set by administration. At least an hour poring over the staff handbook (again).  Being the passive receiver of content rather than engaging in or creating it. The double-standard of constantly being told to not teach this way, while enduring it year after year. This is the perfect time for real professional development, but other agendas typically get in the way.

Things are changing! This time around, my school decided to seize our in-service days, and not only provide our staff with real professional development, but more importantly, choice.

My school district runs on a year-round schedule, which results in more frequent, small, and evenly-spaced breaks throughout the year.  Consequently, it also means that while many districts in the country are in their third week of school, mine just wrapped up its eighth week, and we’re now on Fall Break.

Towards the end of last school year, the resource specialists for each core content met together with our principal to discuss PD. We’d been holding tech trainings on Fridays during lunch with modest success, and wanted to continue something in that vein the following year. One of us (I honestly can’t remember who) got the brilliant idea of holding a mini-conference that we dubbed an EduCon.  The staff would be presented with a schedule of sessions, much like a “real” conference, and would have the choice of attending sessions that they felt would be valuable to their professional growth.  We decided that we would meet over the summer to plan it and put it into action.

During our summer meeting, it took quite some time figuring out the logistics. First, we had to determine what types of sessions that staff would find useful.  Technology? Differentiation and scaffolding? Best practices? Assessment? All of the above?

After narrowing it down, we carefully created a schedule.  We thought this would be easy, however there were factors such as a natural progression from one session to another (e.g. learning JupiterEd basics before how to create and submit assignments) and leaving some of the more “engaging” ones towards the end so that teachers wouldn’t bail. Even after we left the meeting, we continued to refine it up until the day before the EduCon.

I created a Google Form so that staff could sign up for their sessions. In this form I used the add-on Choice Eliminator so that there wouldn’t be thirty participants in one session and three in another.

We also decided to create a “passport” that participants would take with them to each session.  At the end of the session the facilitator would stamp it, and at the end of the EduCon, those with a stamp for each half-hour session would be entered into a raffle for Starbucks gift cards, premium parking, etc.

After the initial greeting and team-building activity, the facilitators presented their topcis so that the staff would have a better idea of what would be covered in each session. After that we led them through the sign-up process and explained the passports. I have to admit I was a bit amused when, after explaining the Choice Eliminator, some people panicked that space would run out in their session of choice!

There was definitely a buzz in the room, and everyone seemed excited about not only having PD in lieu of a boring meeting, but that they had a choice. It’s amazing when we, as teachers, feel respected enough to be able to determine what we think is best for where we’re at in our journey.

After that we dismissed everyone to their first location. At the end of the final session, the participants were asked to complete another Google Form and give us feedback to help guide us when planning future PD.

There was nothing but positive feedback!  In terms of what teachers found useful: 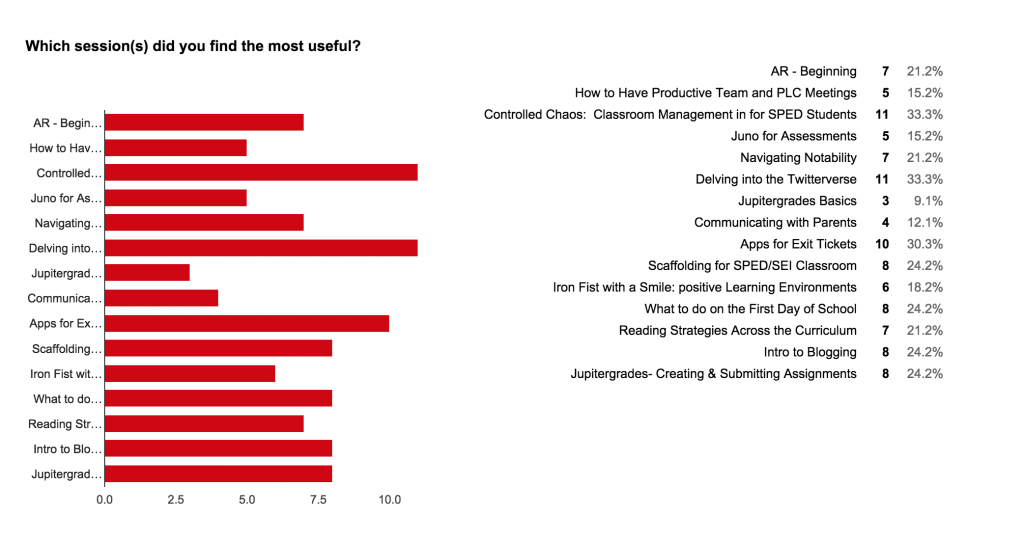 After selecting which workshops they found useful, they were asked, “Please describe why you found these particular workshops useful.” Some responses were:

In response to, “What did you like about formatting our professional development as a mini-conference,” participants answered:

When asked, “What DIDN’T you like about formatting our professional development as a mini-conference,” the main complaint was:

For our next EduCon

After our two-week Fall Break, we have another in-service day, with yet another EduCon planned!  This time the focus will be on technology. We’re also implementing the following changes:

Also, when we have our EduCon after Winter Break, I’d love to invite other staff to facilitate sessions, and not just the resource specialists.  I know that everyone has something to offer, and that we can all learn from each other. I’d love to attend a sessions where a representative from each content area demonstrating how they use an app, incorporate reading and writing, student collaboration, etc.!

I’m very proud of our school for blazing this trail, and am honored to be part of such an innovative team. While we’re probably not the only school that has done this, but I know we’re the only one in our district (for now)! Teacher-led PD on topics that teachers find valuable – what a concept!