We finally did a Mystery Hangout, and it was so much fun! This past Friday my first period participated in a Mystery Location Call with one of the classes at Shawn Churchill‘s school.  I originally connected with her via the Mystery Location Call Google+ Community, which has many members and is still growing.  We exchanged messages via email, Google+, and Twitter to arrange the call and work out logistics.  She was nice enough to share a Google Doc with me that outlined how their class would prepare, so I used that in conjunction with some other resources.

How it all started

I first learned about the Mystery Hangouts from Jo-Ann Fox when I attended the Cue Rockstar Camp in La Jolla this past summer. I was inspired by all of the sessions there, but out of all of them she really motivated me to try the Mystery Hangouts. I’d previously tried to connect with other classes around the world via ePals, but it just never panned out.  This seemed like another avenue to explore, with robust online communities dedicated to the cause.

During her session Jo-Ann shared the roles that she uses for her class. I modified these for mine and created a Google Doc for the roles that required some form of note-taking or advance preparation. I also created a Google Form to allow students to sign up for the jobs that they wanted. As usual, I did quite a bit of preparation to help organize the class since this was our first time doing this.

Per Shawn’s suggestion, my students created a Padlet introducing our city to their class. Unfortunately we ran out of time and didn’t get a chance to exchange these, but I’m hoping we’ll have an opportunity for a second call to do that.

How the call went

Two days before the call, Shawn and I called each other to test out the connection. We decided to try Skype, and luckily that went well.  However, during the call last Friday we ran into technical issues.  While we were able to connect with each other, we couldn’t hear the other class very well. We even tried Google Hangouts, but couldn’t get that working either. After a few attempts of calling each other back and forth, I finally downloaded the Skype app on my phone and we were good to go. 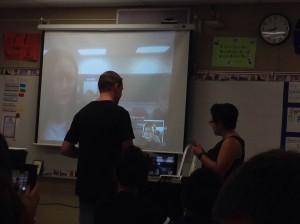 During the call, I noticed that some of my students took more of a lead while the others watched or played a more passive role.  I wish that I could’ve done more to involve them, however I was busy monitoring the call. The students that had the key roles – communicator and geographer – did the majority of the work. I don’t even know if the question keepers actually took notes, and the runners weren’t sure of what to do.  So despite all of my careful planning and preparation, things just…happened.

Because of our late start we also ran out of time.  I had to let my next period take over and try to catch them up as fast as possible, despite them not knowing what was going on.  They did their best and many of them worked really hard to solve it, but in the end the other class guessed it first (actually, we didn’t end up guessing their location at all!) They seemed to be more organized and have a strategy in place, so I have to applaud them for such a job well done!

Thoughts for next time

I have another one lined up for later this month, and I’m desperately trying to connect with classes from around the world.

But Kim, how does this apply to English Language Arts?

Some other colleagues asked me that when I explained the activity. This definitely aligns with the CCSS Speaking & Listening Standards that involve “engaging effectively in a range of collaborative discussions with diverse partners.” And of course, it relies heavily on critical thinking and problems solving skills, which they need in any class.