It’s hard to believe how much stuff I have stored in the cloud.  I have files in Dropbox, in Google Drive, my whole computer is backed up to Backblaze, and I also have Time Machine backing up more files to an external drive.  I’m kind of a storage backup freak.

In my school, teachers and students are either using Dropbox or Drive (a few are using Sugarsync).  While I’ve been using Dropbox for years, I’m starting to really consider making the switch to Drive, especially since my school district uses Google Apps for Education (GAFE). Let’s take a look at these and see how they measure up.

I find both Dropbox and Drive similar in terms of navigation.  While both can be sorted by file name and date modified, they have slightly different features.  Dropbox has an extra column that is customizable to display who the files are shared with, the type of file, extension, and file size (just click on that column to change it). Drive has an additional two columns that display the owner and the individual file size. 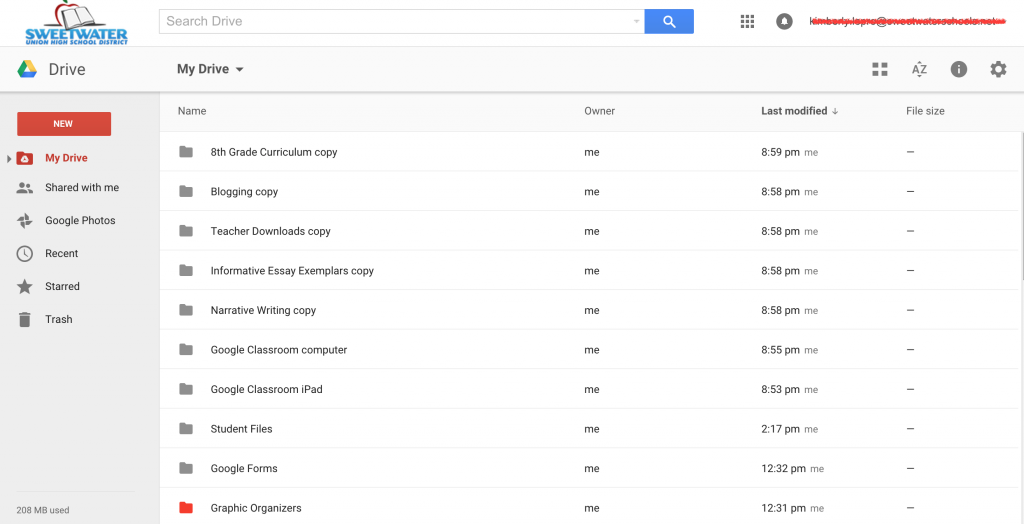 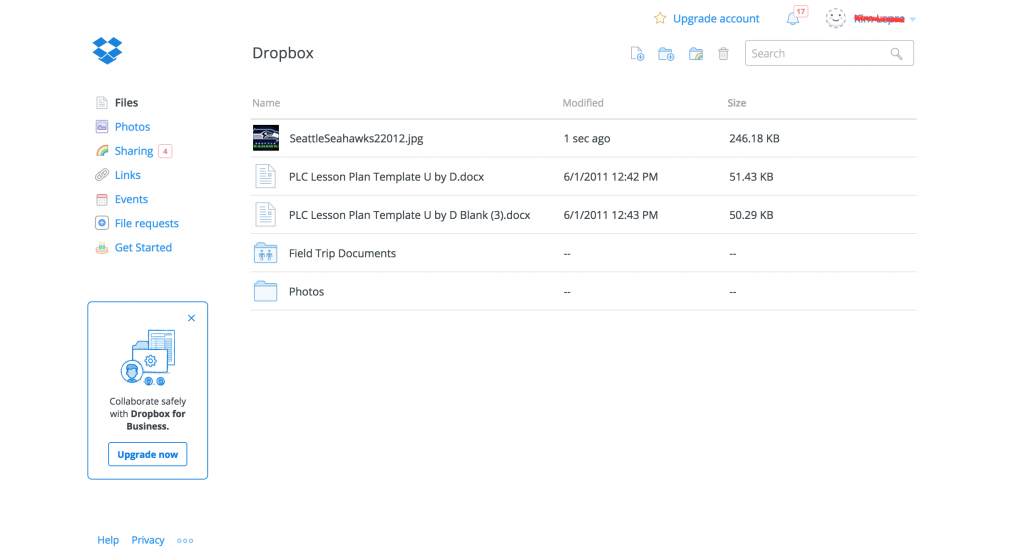 Both services are very easy to use.  One option is to download the programs onto your computer, which creates a special folder for each service. This allows you to drag the files that you want to sync into the folder, which then syncs it to the cloud.

Alternatively, you can also easily add files when using a web browser. Simply log into one of the services and drag the file from your desktop to that page.

I downloaded a file and uploaded it to both Dropbox and Drive.  They were quickly added on both services. 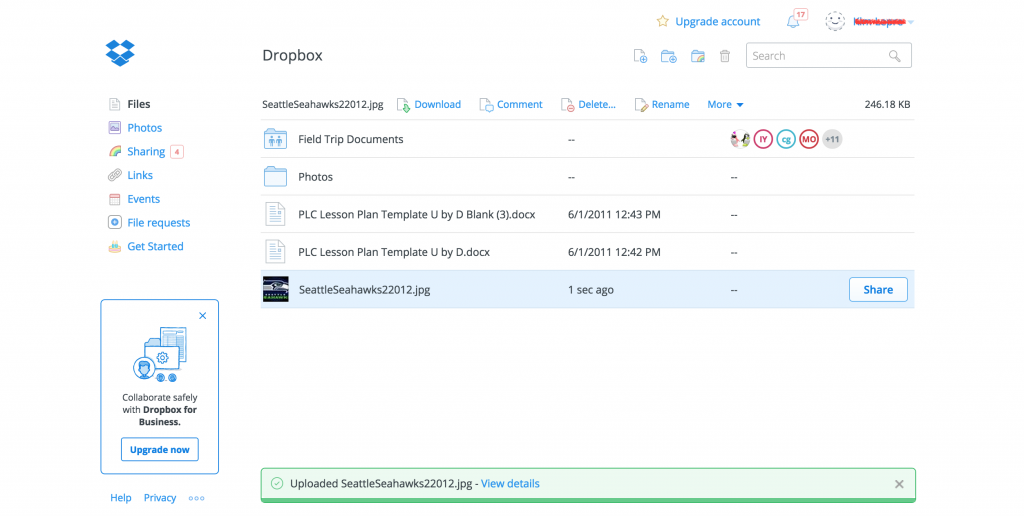 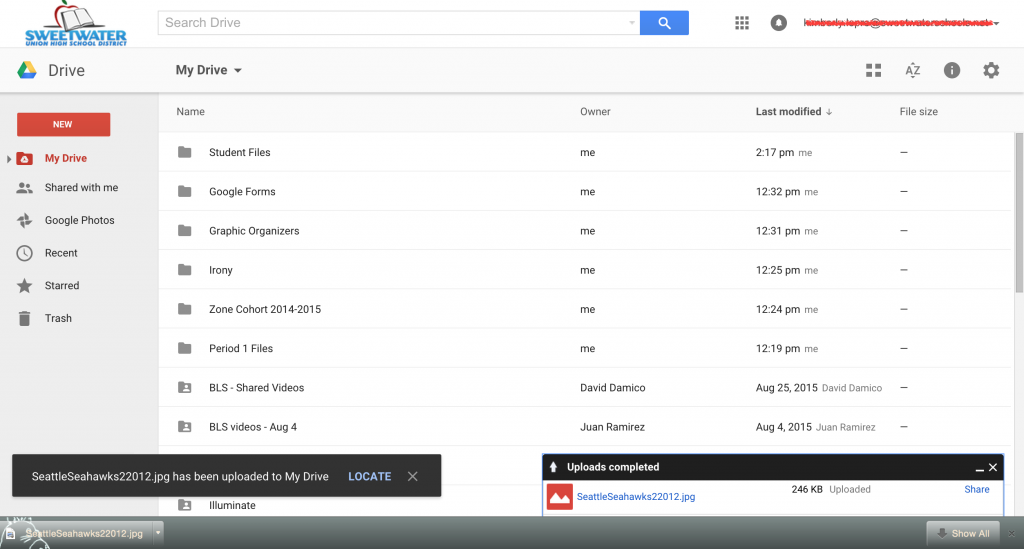 Dropbox is slightly more intuitive than Drive, however once you know how to share in Drive, they’re about the same.

For Dropbox, all you have to do is hover your mouse over the file name and a Share button appears. You can either 1) share it via public link or 2) enter the email addresses of whom you’d like to share it with. Sharing the link allows users to download and view it, but any changes only reflect on their end. Emailing the file to others enables them to edit the file in both your Dropbox and theirs as well.

For Drive, you click on the file, and then on the universal Google sharing icon at the top.

From here you can 1) get a shareable link or 2) email someone the link. When you email the link, Drive allows you to decide if you want the recipient to edit, view, or comment on the file. One feature that I REALLY love is the ability to alter shareable Drive links so that yo

u can force a computer to download or make a separate copy of the file.  But that’s for another post.

Google Drive wins hands-down in the storage wars. With a regular, non-education account, you get 15 GB of storage for free.  If your school has a Google Apps for Education account, teachers have unlimited storage!

Dropbox only gives you a paltry 2 GB for free (more if you refer friends and convince them to sign up), unless you want to upgrade to 1 TB for $9.99 a month or $99 a year. REALLY?! It’s either practically nothing or a limitless amount, with nothing in the middle?

Dropbox recently added a feature that allows you to edit Microsoft Office Docs with Office Mobile or Office Web apps, which then saves the updated version in Dropbox.  In addition, you can edit it in Microsoft Word and easily save the updated version to Dropbox.  I just selected “Open” for a Word document from the web interface, which then opened it in the Word program, and was presented with a Dropbox badge.  This allowed me to comment, view file history, shared folder settings, and share the link right from Microsoft Office. After I finished editing, I just save it as usual, and it would update in Dropbox. 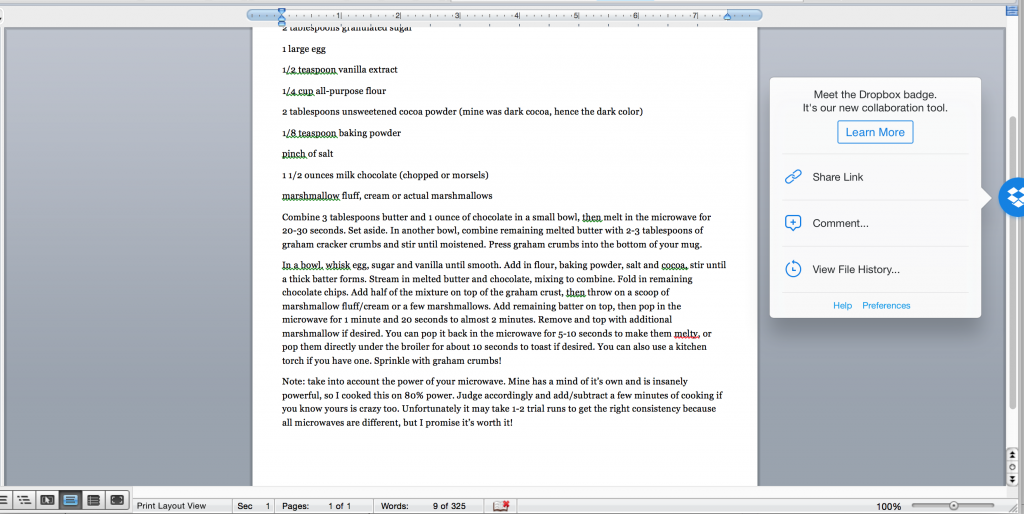 Google Drive and the apps associated with it are known for their collaborative capabilities. You can open a Word, Excel, or Powerpoint file in one of the Google apps (Docs, Sheets, and Slides, respectively), and share it with collaborators to edit.  This is particularly useful with students, since they’re able to collaborate in real time on documents when doing group work.  Note that this only works with the aforementioned file types, it does not work with PDFs.

At this point it may seem like both Dropbox and Drive are fairly equal. Storage is an issue for most people, but for others, it’s not a deal breaker.

However, Google Drive is linked to the Google suite of tools, including Gmail, Calendar, Docs, Slides, Sheets, Forms, Drawings, My Maps, Voice, Sites, Hangouts, Google+, Blogger, and many more.  These are just the ones that I’ve used!

For education, the following are free:

It’s hard to believe that you get all of that PLUS more storage!

I’ve been a huge supporter of having students use Dropbox to store their assignments.  When we’ve tried using Google Drive in the past, it was glitchy and unreliable.

However now Dropbox is being glitchy, and Drive is gaining momentum in my school. Considering that I’m going to be trying Google Classroom soon (a future post, I promise!), I think it would be prudent to start packing up and moving over to Drive.

There are more features and reasons why I think I’m going to make the switch to Google Drive, but GAFE integration and storage size won me over. If you have other insights as to which one is superior, please comment below.