This year I want to work on building more engagement into my curriculum, while also fostering teamwork and collaboration. I’m not sure why it took me 13 years to “think” of this!  To facilitate this, I’m going to test it out on Fridays.

For this first official Friday, I decided to do a team-building exercise with Geoguessr.  I learned about this wonderful game at the La Jolla CUE Rockstar camp last June. My very first session was with Jo-Ann Fox, whose Google Hangouts session was so inspiring! One of the first activities of her session involved all of us playing a Geoguessr challenge that she’d created.  I took note of it and how I’d love to do it with teams in my class. 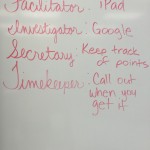 The first step in increasing collaboration is teaching students how to work efficiently in groups. I initially set up group roles since they’re still getting used to having them in the first place.

My plan was to specify what each person was doing so that nobody would sit around doing nothing. I also wanted them to be more organized in their approach to it. The Facilitator was in charge of having the game up on their iPad, the Investigator was Googling anything that they came across, the Secretary kept track of the points they earned at the end of each round (which was crucial since they were constantly being kicked out of the game), and the Timekeeper announced when they advanced to the next round.  In my head, all of those roles were necessary to keeping order.

However, I discovered that it created a situation where the Secretary and Timekeeper didn’t do much work at all. So I tweaked it so that they all had the game up on their iPad searching for clues, all while maintaining their roles.  The students naturally created their own system to solve the puzzle, and I was quite proud of them!

I created a new challenge for each period and posted the link in the Calendar in Jupitergrades.  I knew that the students would talk about it with each other, so I wanted a fresh game with new locations for each class.

rall, I think it was a successful Fun Friday.  The kids were very engaged the entire time, and they asked me if we were going to do this more often.  I plan to add a group reflection component to it so that they can evaluate how they work together as a team.

But wait – what does this have to do with ELA?

Funny you should ask! My students inquired about that very topic (aren’t they perceptive?). As you can imagine, the written reflection piece can be incorporated into any part of a unit. There could be an expository piece explaining what Geoguessr is, or a set of instruction on how to play it. For argumentative, students can explain the pros and cons of using various methods to win. A narrative component would be amazing! Students could write a fictional personal narrative about their journey in various cities.